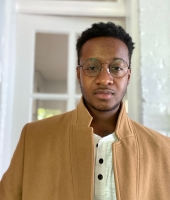 Jae has spent over a decade in search and service of the elusive magic — the glue that connects people, places, and experiences. He’s walked door to door in favor of policies and people, challenged the status quo and pushed the envelope in product development, and traveled the world all in service of one magical goal: build a more inclusive society.

Jae currently leads product innovation initiatives for EmployBridge, the nation’s largest industrial staffing company, where he focuses on creating a more equitable future of work. In addition to leading a private consultancy, Jae has held positions at companies like Bently Enterprises and Bently Heritage and served as a Fellow for both the White House LGBTQ Tech & Innovation Summit and Coca-Cola Next Generation Leaders.

Jae has had the distinct honor of working alongside food chemists, software developers, designers, and politicians in efforts to chart new paths and leave the world a little better than he found it. After working on Capitol Hill for the late Civil Rights leader Congressman John Lewis, he went on to build technology systems and consumer products, including two award-winning spirits brands, as well as reimagine the Stockholm tourism experience for people with impaired mobility. Along the way, Jae picked up a B.A. from the University of California, Berkeley and an MBA from Babson College’s F.W. Olin School of Business.

Throughout all of these experiences, Jae has remained committed to unlocking the magic hidden within the human experience and furthering the advancement of all people. As an openly trans Black man, he’s hoping to help usher in a future where all bodies are safe, cared for, respected, and empowered to thrive.