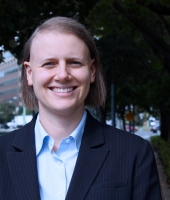 As Senior Strategist, Lisa has various responsibilities based on her 20-year history in the trans movement. She oversees finance and operations, contributes to policy discussions, and, as a co-author of the National Transgender Discrimination Survey (2008) and the 2015 US Transgender Survey, she guides the current US Trans Survey team. Lisa was the first attorney working full-time on transgender rights at the national level in 2001, when she established the Transgender Civil Rights Project at the National LGBTQ Task Force (then known as the National Lesbian and Gay Task Force), where she worked on countless local and state nondiscrimination laws, identity document policies, as well as access to social services. She served as Deputy Executive Director of NCTE from 2013 until 2020, when she downsized her role as her family welcomed a second child.

Lisa is known for her work on homeless shelter access, with the publishing of the comprehensive guide, “Transitioning Our Shelters: A Guide to Making Homeless Shelters Safe for Transgender People” (2003) and helping guide the LG/LGB movement to become transgender-inclusive, having co-authored “Opening the Door to Transgender-Inclusion: The Nine Keys to Making LGBT Organizations Fully Trans-Inclusive” (2008). Lisa was also a force in federal administrative policy advocacy during the Obama Administration, working on dozens of policies, as well as in federal legislation, having led the successful behind-the-scenes strategy to add gender identity to the federal hate crimes bill in 2004, before it finally passed in 2010, being a strategist behind adding trans protections to the Employment Non-Discrimination Act in 2007, and participating on the drafting team of the Equality Act.  Lisa is a graduate of the University of Washington and Georgetown University Law Center.