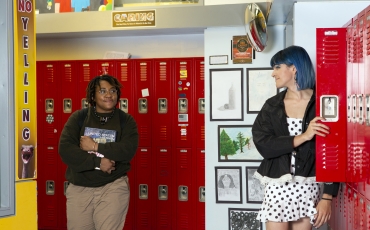 Transgender and gender non-conforming youth face challenges at home, at school, in foster care, and in juvenile justice systems. A national survey by GLSEN has found that 75% of transgender youth feel unsafe at school, and those who are able to persevere had significantly lower GPAs, were more likely to miss school out of concern for their safety, and were less likely to plan on continuing their education.

Critically, it is not just hostility from peers that threatens equal opportunity for transgender and gender non-conforming students.

Too often, school officials themselves single out these youth by refusing to respect their gender identity and even punishing them for expressing that identity. For example, 59% of trans students have been denied access to restrooms consistent with their gender identity. Rather than focusing on their education, many students struggle for the ability to come to school and be themselves without being punished for wearing clothes or using facilities consistent with who they are. Some are denied opportunities to go on field trips or participate in sports. Together with bullying and victim-blaming, these conflicts can lead to disproportionate discipline, school pushout, and involvement in the juvenile justice system.

Thanks to the hard work of parents, youth, educators, and state equality advocates, many states and local school districts have adopted non-discrimination and anti-bullying laws and policies that explicitly include gender identity and expression, as well as developing specific policies and training that spell out what nondiscrimination means for trans students.

Safe Havens: Closing the Gap Between Recommended Practice and Reality for Transgender and Gender-Expansive Youth in Out-of-Home Care
Schools In Transition: A Guide for Supporting Transgender Students in K-12 Schools
Trans Policy Clearinghouse, Campus Pride
Bending the Mold: An Action Kit for Transgender Students, Lambda Legal
Beyond the Binary: A Tool Kit for Gender Identity Activism in Schools, Transgender Law Center
Recommended Practices to Promote the Safety and Well-Being of LGBTQ Youth and Youth at Risk of or Living with HIV in Child Welfare Settings, Child Welfare League of America and Lambda
A Place of Respect: A Guide for Group Care Facilities Serving Transgender and Gender Non-Conforming Youth, Sylvia Rivera Law Project and National Center for Lesbian Rights

While the nation’s attention is focused on responding to the COVID-19 pandemic, the Trump administration on Wednesday intervened in a federal civil right lawsuit in Connecticut that would ban trans

An 11-member congressionally mandated commission to study the issue is recommending that the Selective Service system be made gender-neutral, requiring all persons aged 18-25 to register.

More than 50 national, regional and state organizations have signed onto a letter urging Idaho Governor Brad Little to veto legislation that would ban transgender student athletes from participatin