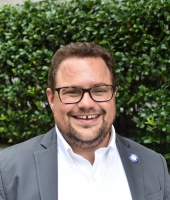 Rodrigo Heng-Lehtinen is a transgender policy, advocacy, and messaging expert. As a Cuban American transgender man, his wide-ranging experience in the LGBTQ movement has covered field organizing, leadership development, fundraising, and media advocacy. He previously worked with Freedom for All Americans, GLAAD, the Transgender Law Center, Gender Justice LA, and the National LGBTQ Task Force. He joined NCTE as Deputy Executive Director in 2019, stepping up as Executive Director in 2021.

In past roles, he trained thousands of volunteers to canvass and phone bank on groundbreaking nondiscrimination and marriage equality campaigns, and organized leadership development programs in transgender communities and LGBTQ communities of color, honing new strategies for social change. From 2016 to 2018, he co-led the successful campaign to update New Hampshire’s nondiscrimination protections to include transgender Granite Staters.

Rodrigo graduated from Brown University and lives in Washington, D.C. He serves of the Board of Directors of AsylumConnect, a non-profit connecting LGBTQ migrants fleeing persecution with resources in the US and Canada.