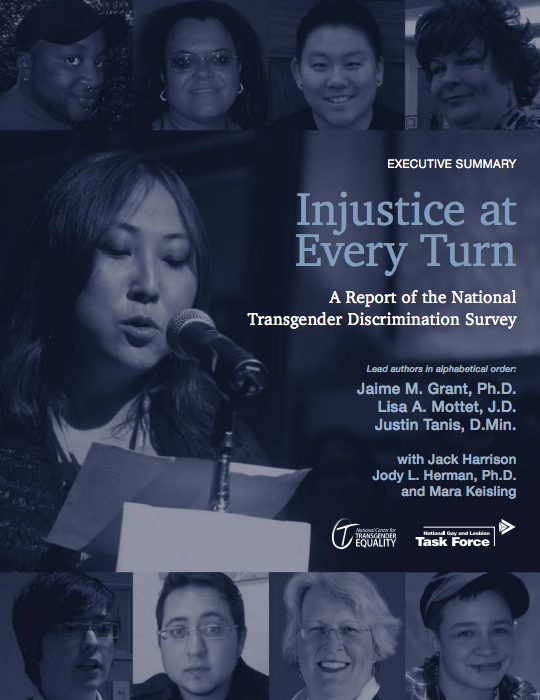 This study brings to light what is both patently obvious and far too often dismissed from the human rights agenda. Transgender and gender non-conforming people face injustice at every turn: in childhood homes, in school systems that promise to shelter and educate, in harsh and exclusionary workplaces, at the grocery store, the hotel front desk, in doctors’ offices and emergency rooms, before judges and at the hands of landlords, police officers, health care workers and other service providers.

The National LGBTQ Task Force and the National Center for Transgender Equality are grateful to each of the 6,450 transgender and gender non-conforming study participants who took the time and energy to answer questions about the depth and breadth of injustice in their lives. A diverse set of people, from all 50 states, the District of Columbia, Puerto Rico, Guam and the U.S. Virgin Islands, completed online or paper surveys. This tremendous gift has created the first 360-degree picture of discrimination against transgender and gender non-conforming people in the U.S. and provides critical data points for policymakers, community activists and legal advocates to confront the appalling realities documented here and press the case for equity and justice.

Hundreds of dramatic findings on the impact of anti-transgender bias are presented in this report. In many cases, a series of bias-related events lead to insurmountable challenges and devastating outcomes for study participants. Several meta-findings are worth noting from the outset: