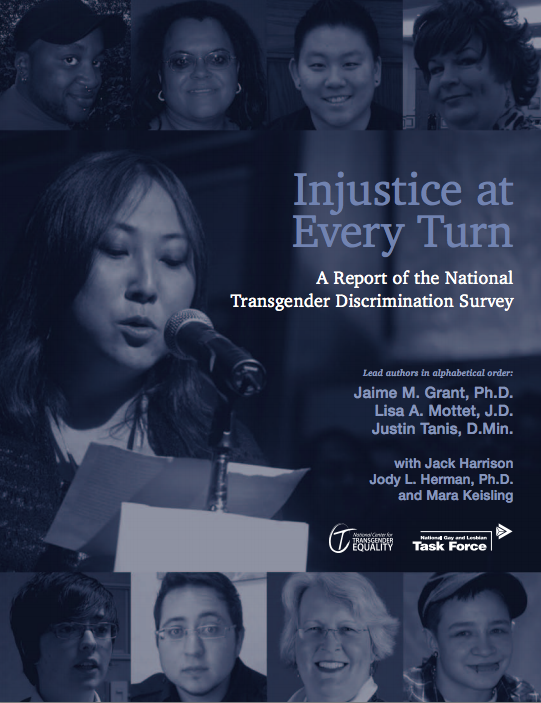 Every day, transgender and gender non-conforming people bear the brunt of social and economic marginalization due to discrimination based on their gender identity or expression. Advocates confront this reality regularly working with transgender people who have lost housing, been fired from jobs, experienced mistreatment and violence, or been unable to access the health care they need. Too often, policymakers, service providers, the media and society at large have dismissed or discounted the needs of transgender and gender non-conforming people, and a lack of hard data on the scope of anti-transgender discrimination has hampered the work to make substantive policy changes to address these needs.

In 2008, The National Center for Transgender Equality and the National LGBTQ Task Force formed a ground-breaking research partnership to address this problem, launching the first comprehensive national transgender discrimination study. The data collected brings into clear focus the pervasiveness and overwhelming collective weight of discrimination that transgender and gender non-conforming people endure.

This report provides information on discrimination in every major area of life — including housing, employment, health and health care, education, public accommodation, family life, criminal justice and government identity documents. In virtually every setting, the data underscores the urgent need for policymakers and community leaders to change their business-as-usual approach and confront the devastating consequences of anti-transgender bias.

Sixty-three percent (63%) of our participants experienced serious acts of discrimination—events that would have a major impact on a person’s quality of life and ability to sustain themselves financially or emotionally. Participants reported that they had faced:

Each of these can be devastating and have long-term consequences, as we will see in this report.

“I was kicked out of my house and out of college when I was 18. I became a street hooker, thief, drug abuser, and drug dealer. When I reflect back, it’s a miracle that I survived. I had so many close calls. I could have been murdered, committed suicide, contracted AIDS, or fatally overdosed.”

Almost a quarter (23%) of our respondents experienced a catastrophic level of discrimination, having been impacted by at least three of the above major life-disrupting events due to bias. Imagine losing your home, your job and your children, or being bullied by a teacher, incarcerated because of your gender identity and sexually assaulted. These compounding acts of discrimination—due to the prejudice of others or unjust laws—exponentially increase the difficulty of bouncing back and reestablishing a stable economic and home life.

While these statistics are often devastating, it is our hope that they motivate people to take action, rather than simply despair. The gravity of these findings compels each of us to confront anti-transgender bias in our communities and rebuild a foundation of health, social and economic security for transgender and gender non-conforming people in our communities. We do believe that the situation is improving and look forward to future studies that will enable us to look at discrimination over time.

All of us — whether we are human resources professionals, nurses or doctors, police officers or judges, insurance company managers, landlords or restaurant managers, clerks or EMTs, teachers or principals, friends or community advocates — must take responsibility for the pervasive civil rights violations and callous disregard for basic humanity recorded and analyzed here. It is through the choices that each of us make, and the institutional policies we reject or uphold that either recreate or confront the outrageous discrimination study participants endure.

We present our findings, having just scratched the surface of this extensive data source. We encourage advocates and researchers to consider our findings with an eye toward much-needed future research. We expect this data to answer many questions about the lives of transgender people and the needs of this community and to provoke additional inquiry in years to come. To this end, we plan to provide the data set to additional researchers to perform deeper or different analysis.